Speed Skating Canada offers the Cutting Edge Pin Program to recognize the skaters as they acquire various speed skating skills. Mid year updates and pins were passed out to Youth 1 and Youth 2.  There will be 2 more pin testing dates for the season:

Competitive skaters still interested in pin testing are to contact Jennifer and can come for testing on Sunday Feb 10th, at 6:30 pm.

On Saturday January 26th Portland Outdoors held its 9th annual Skate the Lake event under perfect conditions. Due to very cooperative weather conditions and the dedicated event volunteers the ice conditions were the best ever for this event. Cracks were many but small and easily detected and the ice surface was as smooth as any Zambonied surface can be. A number of skating events were provided to meet the needs and abilities of the large number of skaters who attended the event.

SLSSC was overwhelmingly represented by 15 of our members comprised of 12 masters skaters and three of our competitive skaters. We had eight skaters in the field of 26 in the 10km event and they took away four gold medals in various age categories. Seven of our skaters competed in the 25km , producing a further three medals: one each of gold, silver and bronze. Two skaters took on the grueling 50km and produced a bronze and a gold.

Detailed results of the event can be viewed at marathonskating.org

Congratulations to Chloe, Connor and Nicholas!!! 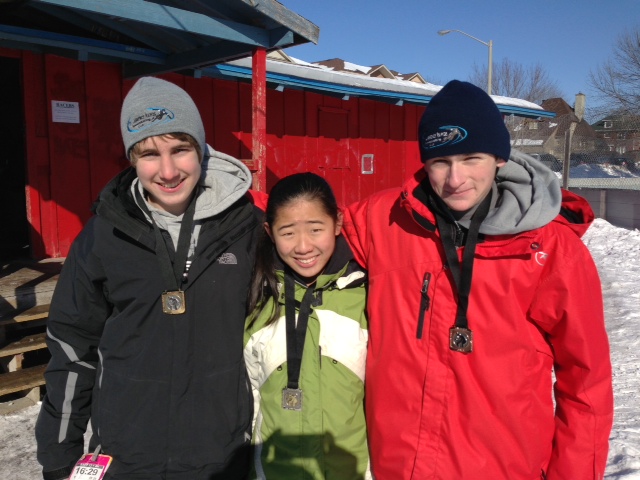 (Sorry, this post got buried for a while -Steve)

Following a cold week with good skating conditions the Brewer oval came under the influence of warmer weather on the weekend that resulted in challenging skating on the Saturday afternoon and a wicked challenge for Sunday with extremely high winds. Of the 24 entries for the 21km, four were from our club (Connor, Kyle, Heidi and John). Connor and Kyle placed 12th and 15th respectively. John and Connor used the 4km race as a warmup for the 21 and both John and Heidi turned in good performances for the 21km event. On Sunday the 42km was modified to a one hour blizzard challenge as a result of winds up to 90km/hr. At one point during the race our lightest skater (Connor) was blown backwards! However he still managed, along with Kyle, to clock 61 laps while John knocked off four fewer (John prefaced this race with the 10km which was held one hour before the 1 hour challenge). Heidi chose short track in Kingston on Sunday.

Long distance skating is now becoming popular within the club and we have seven members, including four masters and three competitive group skaters, who have now participated in the half and full marathon MSI (marathon skating international) events.  The next event is Saturday Jan.26 with the ever popular Skate the Lake at Portland on Big Rideau Lake and several of our members will be taking part in this event. The last event in the east will be the inaugural Lake Champlain marathon Feb 8,9 in Vermont. At least five of us are planning to attend this ‘probably loaded with fun’ event. It is never too late to sign up for either of these two events but if you just want to experience the event atmosphere you are encouraged to attend the Skate the Lake event as a spectator.  For pictures of the Ottawa marathon weekend go to the MSI website and look for the event description and Alicia’s pics.

Here is the meet protocol.

This last weekend, January 5th and 6th I attended my first Long Track competition. It was in Lake Placid and took place on the Olympic oval. There were three skaters from our club present, me, Chloe Segal and Nick Everett. For me the first day it was a real challenge for me. New style skates, different ice and wider corners, I felt like a beginner skater again and was not very comfortable or relaxed at all. The second day I tried to stop being competitive (it wasn’t working anyway as I was in a solid last place) and just try and skate and follow the rules and stay on my feet. Yes I fell on day 1. So the second day was better, my times were terrible but I at least enjoyed it.
Nick and Chloe did really well. Nick skated like a pro, beautiful form (in my eyes) or course fast. He finished the weekend with a silver medal, against some stiff competition. Chloe who was also new to long track skates picked it up very quickly and also won a silver medal in her age category. It was a fun weekend and a great change from short track and indoor skating. Now I just need to practise a bit more.
I would like to add, that as a master skater it is so nice that the younger kids and older kids (even though they are hanging around with their friends from all over) take the time to watch the master skaters race and offer support, cheering and encouragement. I have noticed this at meets, and now at short track. Thanks guy’s, it helps and yes, we need encouragement too. I don’t think this is something common to all sports, or all kids. 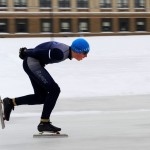 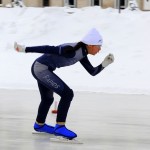 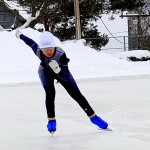 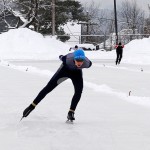 There is a one day ability meet coming up in Syracuse on Saturday January 19th.

Registration is online at the link below.  Here is the announcement from the Syracuse club:

Eligibility: All skaters must be registered speed skaters of the United States or Canada.

Awards: Trophies or Medals will be awarded to the Overall 1st through 5th in each division. Divisions will be based on ability and not age or sex. Groupings will be determined by the SSSC Meet Coach.

T-Shirts: Available for pre-order, $20 for Adult Sizes and $16 for Youth Sizes

The Long Track Provincial Championships are coming up on January 26th and 27th at Brewers Park in Ottawa.

All club skaters are eligible to compete and shouldn’t miss this opportunity to race on a long track outdoors..

Girls 11 and over, and boys 12 and over, can qualify to race in the Canadian Age Class Long Track Championship.

The entry form includes details of the racing formats.  Ask coach Jen if you have questions.

Entry forms are due by Tuesday January 15th. **[Correction – Due by Sunday January 13th]** 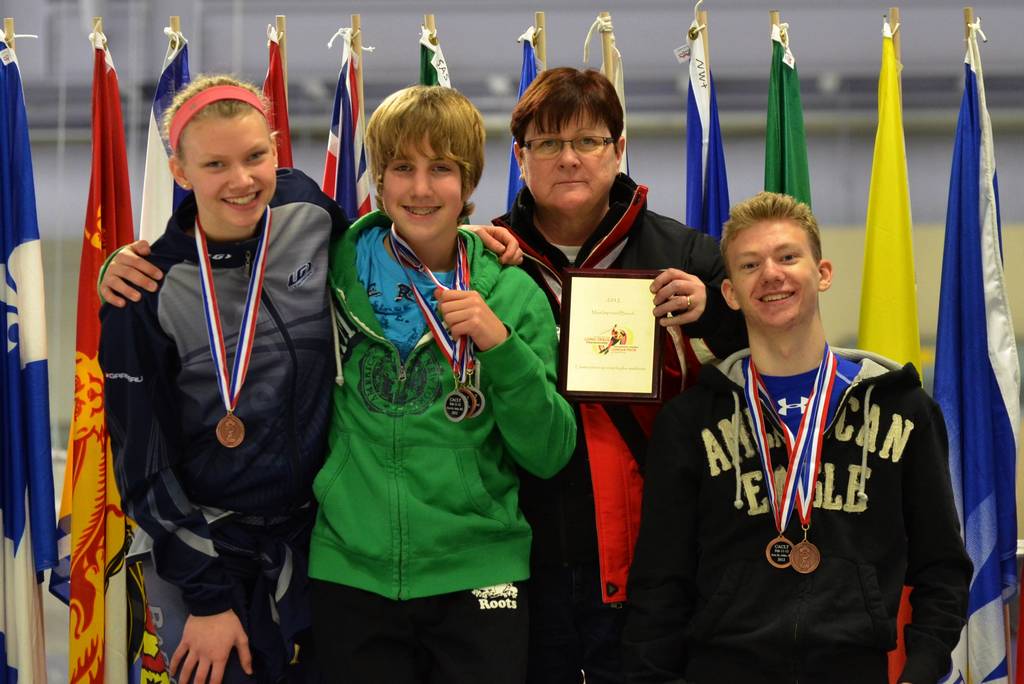 Sarah, Nick and Alphonse at the 2012 Canadian Age Class Championships

Kingston is hosting a one day regional ability meet on Sunday January 20th.

Registration forms are due to Heather by Tuesday January 8th.