Warning: "continue" targeting switch is equivalent to "break". Did you mean to use "continue 2"? in /homepages/6/d193998757/htdocs/SLSSC/wp-content/themes/suffusion/functions/media.php on line 666

Warning: "continue" targeting switch is equivalent to "break". Did you mean to use "continue 2"? in /homepages/6/d193998757/htdocs/SLSSC/wp-content/themes/suffusion/functions/media.php on line 671

Warning: "continue" targeting switch is equivalent to "break". Did you mean to use "continue 2"? in /homepages/6/d193998757/htdocs/SLSSC/wp-content/themes/suffusion/functions/media.php on line 684

Warning: "continue" targeting switch is equivalent to "break". Did you mean to use "continue 2"? in /homepages/6/d193998757/htdocs/SLSSC/wp-content/themes/suffusion/functions/media.php on line 689

Warning: "continue" targeting switch is equivalent to "break". Did you mean to use "continue 2"? in /homepages/6/d193998757/htdocs/SLSSC/wp-content/themes/suffusion/functions/media.php on line 694
 January 2014 - St Lawrence Speed Skating Club

This past weekend saw the Skate the Lake Event celebrate its 10th anniversary and the SLSSC joined in on the celebration with a total of 15 club members participating in various races over the two days. The Event was also given the right to hold the North American Marathon Championships. The ice conditions were the best ever experienced in the history of the event, however, this was balanced off with extreme windy conditions on Saturday. Although much colder on Sunday there was no wind and the sun shone for throughout most of the day’s racing. Unfortunately for the event, many pre-registered would be participants did not arrive as a result of the poor and often dangerous driving conditions. At least six of the regulars from Waterloo had to turn back due to the road hazards. However, those who attended enjoyed the two days and smiles were all around. Jake Maarse of North Gower and Catherine Kwiecien of Waterloo won the overall men and women’s categories for the North American championships which are based on combined results of the 25 and 50km races. SLSSC did extremely well, medaling in many events, gender and age categories. Complete results will be posted on the Marathon skating website.
Click on the Gallery picture for a larger version. 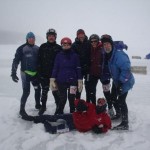 SLSSC participants in the 25 km on Saturday. John B., John A. and Heidi (not in photo) competed in the 50km on Sunday as well. 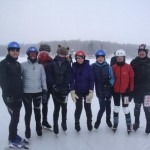 SLSSC participants in the 10 km on Saturday 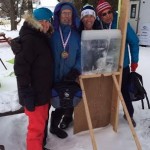 Tonya (Ottawa), John, Marco (Portland), and Jake (North Gower) with the thickest slice of Big Rideau ice in the history of the event.

Two skaters missing from the photos are Emma Grace and Chloe Segal who competed in the 5km on Sunday and who came in first (Chloe) and second (Emma Grace) overall.

The ice schedule for Tuesday January 28th, 2014 is as follows:

This means that both the Youth 1 and Learn 2 Skate programs will not skate on this evening. Please refer to the Practice schedule for future ice time changes.

For those Youth 1 skaters looking to register for the Kingston Meet, please submit your forms and payment to Heather by Sunday January 26th.

The Gloucester Concordes invite all Master’s skaters to the Master’s International Short Track Championship on April 5-6, 2014. You can read the poster and the announcement for more information. Registration will be completed online, with payment submitted to Heather by March 1st, 2014.

The Barrie Speed Skating Club will be hosting the 4th (and last) Provincial series meet of the season on February 1-2, 2014. Information about the meet can be found on the OSSA website. The registration form and payment are due to Heather by Wednesday January 29th, 2014. Good luck to those who will be attending.

The Gatineau Speed Skating club would like to invite all Rapids to their meet on Saturday, January 25th. For more information, please read the Invitation. Registration form and payment can be submitted to Heather by Friday, January 17th.

The Kingston Striders SSC will be hosting the Eastern Regional Meet #4 on Saturday February 8th, 2014. The announcement can be read on the OSSA website with the entry form also available. Please submit your entry form and payment to Heather before January 29th, 2014.

The Seed times can be found on the OSSA rankings page. If you do not have a Seed time, please see your Coach(es) and they can help you out.

The Ottawa Pacers will be hosting the Ontario Provincial Long Track Championship on January 18th & 19th at the Brewer Park Oval. Registration is to be completed online, then fill out the entry form and return it, with payment, to Heather by January 8th, 2014.

Looks like some of our skaters had some fun during the Christmas skating session. 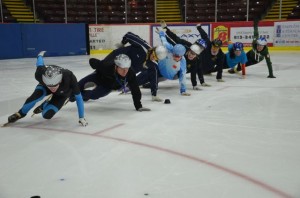 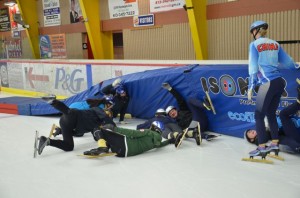