The Buffalo Speed Skating Club is excited to announce that they are now taking reservations for their 2015 Junior Summer Training camp.  This will be the third year for the highly successful 6 day camp, designed for competitive junior skaters ages 12 to 21.

Instructed by: Eastern Regional Camps director Tom Miller.
Location: The Northtown Center at Amherst – 1615 Amherst Manor Drive Amherst, NY 14221 (map)
Dates: Monday, August 24 – Saturday, August 29.
Total Ice Time: 15 hours (on an Olympic size rink).
Total Dryland Training: 11 hours.
Cost: Single skaters: $350.00. Family discount: $300 per each additional skater in the same family.
Accommodations: If desired, out of area skaters will be assigned a host family to stay with during the camp. (Included in the cost of the camp)
Registration: The camp will be limited to the first 25 applicants. They expect it to fill quickly, so send in your registration early to insure your participation.

Congratulations to the 26 SLSSC members who participated in the Eastern Regional Meet #4, hosted by us! It was a great day of skating, with many new PB’s set! Check out the PB page for the full list.

Congrats to Nolan Roney for joining the sub-60 Club! We are looking forward to cake!

Here’s a breakdown on how everyone finished:

A special thanks to all the volunteers who helped out and made the day go so smoothly.

The Official Protocol can be viewed on the OSSA website.

This past week (Feb 05-08), the World Masters Winter Games were held at various venues in and around Quebec City. For skating enthusiasts there were competitions in short track, long track and marathon skating. The 50km was held on beautiful Lake Beauport north of the city. By all accounts the conditions were absolutely perfect. The 25 km was held on the refrigerated oval that has been established on the Plains of Abraham. Although SLSSC President John Ambrose registered for these events, he had to cancel at the last moment due to illness. If you wish to see the results you will have to find your way to the website of pentathlon des neiges. 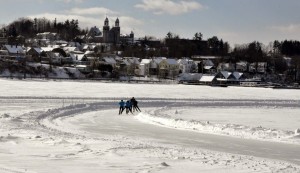 We still need volunteers for various positions, including assistance with the kitchen, lap counters, raffle table and other positions.  If you can spare your time this Saturday, please contact Rob Giroux, our meet coordinator, at giroux.robert.p@gmail.com

In addition, we are required to supply food for the officials and volunteers.  If you are able to supply any items (for example juice boxes, chili or meatballs in a crock pot, yogurt, fruit and veggie trays, granola bars, baked goods), please contact Darlene Nelson at Darlene.Nelson@wspgroup.com who will be coordinating the lunch and snack items.

As well, we still require additional raffle items for our raffle table.  This is an excellent fundraiser for our club.  We would gladly accept any item for our raffle table including items that you would like to re-gift!  Please drop off tonight during the Masters/Competitive skaters practice or let Darlene know the item that you would like to donate and drop it off on Saturday morning at the meet.  Darlene can be reached at Darlene.Nelson@wspgroup.com.

Congratulations Alaine on another great showing – a silver podium spot at the Canadian championships. Keep on rollin!