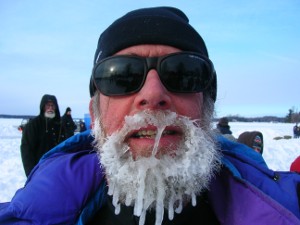 Lake Placid is the second event on the schedule of marathons under the auspices of Marathon Skating International. The first event this season was held in Quebec City in November with the traditional 10km, 25km and 40km races. Lake Placid almost did not take place this past weekend (Dec 17,18) as a result of the unusually warm weather. As of Thursday night Dec 15 the Lake Placid Oval (where Eric Heiden won 5 golds in all of the long track events in the 1980 Olympics) was still a dry concrete pad as it had been since last March. However, on Friday the weather started to turn and although not very cold, it was sufficiently favorable to begin ice making. Traditionally the 10 and 25 km events are held on Saturday morning but by the scheduled time there was only 60mm or so of ice. By mid afternoon it had been built up to about 150mm and it was decided that we could skate by 5:30 that evening. Credit goes to the ice makers and he who controls the weather – the temperature dropped to about -12C and the games were on. A large group partook in the 10 km including this writer and the ice proved to be very fast resulting in some very good times. After a 45 minute break the 25km was held and perhaps foolishly I was at the starting line for this race as well. I turned in a very respectable time and managed to beat two of my regular rivals from the Pacers group. I was able to pack with only two others for this race so with a couple of others my time could have been better and the magical 60 minutes eludes me by a whisker. The problem with two night races of 10 and 25 km is that they provide little recovery time for the next morning’s 40km and because of this some skaters did not skate the 40. Again, always wishing to get my money’s worth I signed up for the third long event in 14 hours. Once again I joined the Pacers group which rents a B and B for the weekend including many of our meals and of course the Saturday evening was the usual enjoyable social event with an excellent home prepared meal accompanied by appropriate beverages. It was a somewhat early evening this year due to the late events of the day and the dreaded 40km facing us in the morning. A glorious Sunday morning it was with temperatures at -15C, sunshine and no wind. 38 were at the starting line for the event and ice conditions were almost perfect (ice a little too hard due to the cold). I started off with a pack of 5 skaters and this grew to 8-10 skaters during our 95 minutes or so on the ice. The race was won by Constant Montpellier of Montreal in the final lap (of 100  laps) when his main rival, Glen Corso of NY stripped the edge from his blade in the last corner and slid out of contention for the winner’s circle.
It was a beautiful day and even the drive back home was enjoyable although one had to fight to keep awake. I was very pleased with my showings in all three races (three second place finishes in my ancient age group that was well represented).

Everyone should have the opportunity to enjoy this historical ice sheet located in the middle of the town of Lake Placid. The SLSSC masters group has talked of a weekend trip to the venue and I would suggest sometime in Jan or Feb we do just that – but not just masters. We should get as many families from the club as possible to have an enjoyable weekend of skating, skiing and shopping.

(For more information on the Marathon’s scheduled for this season, see the Marathon Page.)