A special thanks and congratulations to our President, John Ambrose. 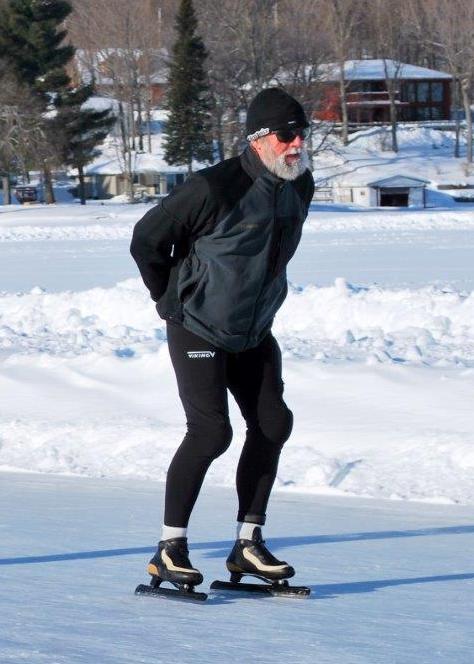 He has taken part in 6 marathon events this year, He always does all the distances which are usually 10, 21 or 25 and 42 or 50km. His total mileage for the season is about 479 km.  Recently in Sylvan Lake, he followed up 50 km race on Friday by skating a 100 km race on Saturday.

Through his love of skating – and particularly marathon skating – he has introduced many club members to the joys of long distances skated in the great outdoors.

If you didn’t get a chance to skate a marathon event this year, give some serious consideration to making it to at least one next year.  It is good to mix your “skate fast and turn left” with a little “go outside, skate not quite so fast, and eventually turn left”.

Here is the final edition of the Marathon Musings.

The final marathons were held over two weekends in Alberta (Feb. 16/17 and 22/23/24) and I was finally able to fulfill a wish of joining in on at least one of these fun weekends. I travelled out to Sylvan Lake (near Red Deer) and with Gaetan Rochette and Pierre Gagne of Quebec City we represented the east in the three races over the three day weekend. Weather conditions were perfect with 0degree temperatures, sunny skies and little wind. The local Dutch dairy farming community put this event on each year and do a real first class job of ice preparation and logistics for the weekend. (80% of all skaters were of Dutch origin!) The 5 km track was in excellent condition although one had to be vigilant of the many pressure cracks that tended to run parallel to the line of skating. Gaetan, Pierre (80 years young) and I skated in a threesome for the 50km on the Friday and we finished together in  about 2 hours and 26 minutes. Saturday was the real test with 100km to complete. The conditions remained excellent. Although Gaetan and Pierre and I all started out together they decided that after 55 km that they had had enough for the day. I continued to plod onwards and managed to finish the 100km in a little over 5.5 hours which was about 2 hours slower than the overall winner! On Sunday Gaetan and Pierre skated the 25km in excellent times but I decided to cheer from the sidelines as a result of being too spent from the previous two days. The overall winner for all three races as well as the 10km race was a professional woman marathoner from the Netherlands.

Sylvan Lake was a great experience and I highly recommend this event in the future for those of you in the club who are hooked on skating distances without challenging corners! Let’s make up a group in the next two or three years and travel out to Alberta for this wonderful event. Save up your nickels.