When: Dec 23, 8 am- 4 pm
Where: Memorial Center, Brockville, ON
Who: Youth 2/Competitive Skaters, Coaches 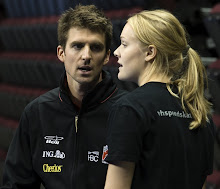 Jonathon is a National Short Track Team Coach at the Calgary Olympic Oval. He was a Canadian short track coach at 2010 Olympic Winter Games, and co-coach of the silver medalist women’s relay team. He is a charter member of Professional Coaches, an NCCP level III coach, and has a degree in Exercise Science from Concordia University.  Prior to becoming a national team coach in Calgary he coached part-time with Montreal-International SSC for 4 years. He was the first Canadian to win a medal at the inaugural World Junior Short Track Championships (Seoul, KOREA; 1994, Silver 500 m) and he was a National and development team athlete for 5 years.