The first two marathon events took place in mid-November in Quebec City and Lake Placid in early December. Rusty skates and rusty skaters took part in the opening events at the Gaetan Boucher oval in St Foy, PQ. Conditions were mild but the ice was excellent. The regular season participants didn’t have a chance against the young hotshots from Quebec who have been training on this wonderful facility for quite some time. They blew us all away in both events. There was a strong contingent from Ottawa and as usual Suzanne Dionne showed well in the overall women’s category. The half marathon of 21km was held Saturday evening with a follow-up one hour challenge race on the Sunday morning. This skater, although disappointed with his slow times, placed second and third in his age category in these two events, and has never being able to come close to matching the superb skating of the winner of both events in my age category, Yves Garneau (69 years) of Quebec City who consistently skates times that challenge skaters 15-20 years his junior. Once again, I was the only SLSSC member to attend this wonderful event. And what is there that isn’t to like about Quebec City?

On the December 7th weekend Heidi and I travelled to Lake Placid to take in the Golden Skate marathons on the famous Lake Placid Oval. The registration of 134 entries for the three events was largest turnout of any marathon event in recent years. Being somewhat intimidated with all of the distance to cover over the weekend Heidi signed up only for the Saturday morning 21 km (already familiar with the distance from last January’s Bytown Marathon) but I was able to convince her that the Friday evening 10km would be the perfect warm up for the next morning (heh, heh). She took the bait and in both events did quite well for a Lake Placid first timer on near perfect ice. Now I had to convince her that because she had to hang around on Sunday morning while I competed in the 42 km she may as well give it a go and see what she could accomplish. Well, congratulations are in order, she completed the 42 km (a total of 73 km for the weekend) and now we have another club member infected with the marathon bug. I also competed in all three races and although there was a large field in my category (10 of the grey power set) I managed to capture a couple of third place finishes (10km and 42km) with very satisfying times. The highlight of the weekend was the strong second place finish of Kevin Frost of Ottawa in the 40s age category. This was an outstanding performance by Kevin who is legally blind.

After the Christmas break we move to natural ice conditions with the Bytown (Ottawa) Marathon in mid-January followed by Portland on the last Saturday of the month. In February the marathon circuit goes out west with five events in Alberta including a 100km event at Sylvan Lake. 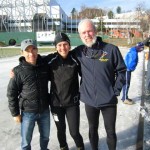 Constant (overall winner of all three races), Heidi and John