The inaugural marathon weekend marathon for Lake Memphemagog at Newport Vermont was held on the March 1/2 weekend. A week before the event we didn’t know if there would be such a skate as the organizers didn’t know if they could provide decent ice, having never organized such a skating event. It was only by luck that the MSI (Marathon Skating International) president, Neal Hundt, had stopped by two weeks earlier on his way to the Quebec Plains of Abraham marathon to grab a bite to eat and that he caught up with Phil White. Phil is the local ‘mover and shaker’ when it comes to organizing long distance events for Newport and after talking to Neal decided that maybe they should add speed skating to the list (along with in-line, swimming and cycling).

In two weeks they had an organization established with plenty of willing volunteers and proceeded to develop an excellent 700 meter oval on the lake. We had 1,5, 21 and 42km events. For the latter two events, due to the short notice, the field of skaters was small, however, very enthusiastic. Those who attended (about 23 skaters in the longer events) had nothing but praise for the organization and the quality of the ice. Most skaters were from the US with four of us (including Heidi and myself) from Ontario and two from Quebec. We all had a good time and the restaurant at oval-side provided a wonderful seafood buffet on the Saturday nite. The same first class local craft beer as we experienced at Lake Champlain last year was available on tap here as well. The competition was of a high level and both Heidi and I came away with a wonderful prize of free registration for next year’s event. This prize was not for winning a race, but for being the last ones in the ‘barn door’ following the 42km race. Although we both skated personal bests, the competition for this event was of very high caliber.

All agreed that Lake M. will be on our personal calendars for next season. 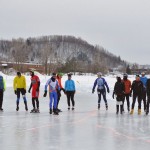 The start of the 21km. The winner of both 21 and 42 was Tom Keene of Boston Mass. pictured here in the red suit and black leggings 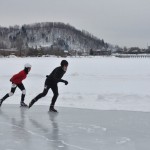